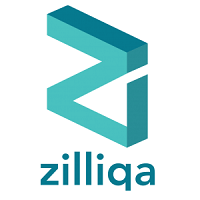 Zilliqa is designed as a high-throughput public blockchain platform. Zilliqa ICO was held from December 2017–January 2018.  Zilliqa’s mainnet was launched on Jan 31, 2019. The next big milestone is a token swap from ERC20 to native ZIL tokens, which is expected to commence in late Q1 2019.

Zilliqa is often considered to be a rising star among third generation cryptocurrencies. Is that so? Let’s find out!

Zilliqa’s mission is to enable new, innovative, decentralized solutions to real-world problems. To do so, Zilliqa’s team focuses on bringing advanced security and scalability features.

Lack of scalability is one of the biggest issues slowing down the adoption of blockchain and cryptocurrencies. Scalability means an ability to make throughput of the network higher, in order to accommodate the growth of the network. Some industries may not require high throughput, but it is vital in industries handling a great amount of operations each second. Payments, digital advertising, online gaming—just a few examples. But many blockchain platforms and cryptocurrencies are not scalable, thus unable to fit into certain processes in the global economy. Lack of scalability is a negative factor restraining blockchain technology from wider use.

However, there are many crypto projects trying to solve the scalability issue. Among them, Zilliqa stands out by implementing sharing to solve scalability issues. In blockchain, sharding is a method of making a network faster by splitting it into parts, or "shards". Each shard is managed by a node and exists in parallel with other shards. Originally, sharding is a term from database architecture. Zilliqa was the first one to implement sharding in permissionless open blockchain. Implementation of sharding had serious academic work done beforehand, which proves the importance of in-depth research in Zilliqa’s global course of actions. 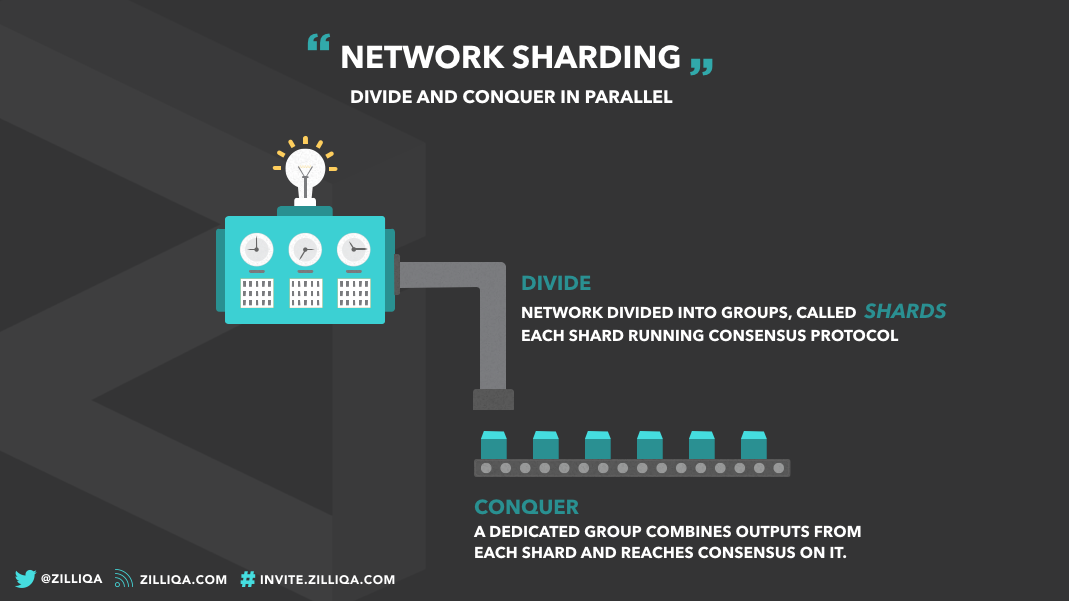 Apart from scalability, the team focuses on another important feature—security. As smart contracts are a tool to ensure trust with interactions between parties, obviously, they have to be secure. Zilliqa tries to fix security issues within the existing smart contract industry. The first step was introducing the new programming language for smart contracts—Scilla.

There are not that many third generation cryptocurrencies, yet there are strong projects among them, such as Cardano and EOS. Apart from that, Zilliqa and all other blockchain platforms still have to compete against Ethereum’s first-mover popularity.

Zilliqa’s team is a group of scientists, engineers, and entrepreneurs brought together with the goal of building a blockchain project that is scalable and secure. Many team members have an academic and scientific background at National University of Singapore.

Zilliqa is led by CEO Xinshu Dong, a professional with a solid background. Before Zilliqa, one of his main fields of work was cybersecurity—an extremely important area for a blockchain professional.

The team consists of many scientists, including Yaoqi Jia, Juzar Motiwalla, Amrit Kumar, and Prateek Saxena. The latter was a co-author of "A Secure Sharding Protocol For Open Blockchains", a groundbreaking academic paper on implementing sharding in blockchain. Zilliqa has a number of advisors, including Loi Luu, the co-founder of Kyber Network.

The main location for the project is Singapore, where it is originated from. The team consists of more than 50 people, together with advisors and community devs, and the team is growing. Apart from new engineers, Zilliqa tries to make the team more balanced by hiring new talents to lead Zilliqa’s marketing initiatives.

Communication: Technology and Use Cases

As for social media power, Zilliqa’s Twitter has 58k followers and 25k members on its Telegram channel. For a relatively new project, that’s not a bad social media presence, with a lot of room to grow. Zilliqa provides some good visual material to catch up on the main ideas and technical facts. Also, there is a lot of technical information about sharding, mining, and DApps—a good way to give additional understanding to the community.

Zilliqa has several notable partners, including DMM, Mindshare, LayerX, and Asteria. Perhaps the most exciting of Zilliqa’s partnerships is formed around Project Proton. It is a massive collaboration between Zilliqa, global media planning and buying agency Mindshare, and several other companies. The goal of this project is to discover opportunities to implement blockchain into programmatic advertising—a group of automated processes in digital advertising. This multi-billion dollar industry demands new solutions for optimization and trust.

Smart contracts might be a solution, as they make interactions between parties more verifiable and trustworthy. Scalability is another important aspect; digital advertising processes an enormous amount of data on a daily basis. In the end, blockchain-based solutions may benefit everyone—media companies, advertisers, and consumers. Zilliqa’s secure and high-throughput blockchain would be used, firstly, as a research tool for finding out new opportunities and solutions.

Overall, Zilliqa’s marketing strategy is based upon developer engagement, enterprise use cases, and real-world impact. Driving developer adoption is an essential task. To bring new developers and ideas to the project and the ecosystem, Zilliqa’s team has launched the Ecosystem Grant Programme. This pool of $5 million will be given to teams and individuals who are interested in developing their own tools and applications for the Zilliqa platform.

With Zilliqa’s mainnet launched, communication becomes even more important. There are great opportunities for building enterprise solutions and consumer DApps. And growing the developer’s community and media awareness are essential parts of helping Zilliqa’s technology unleash its potential.

Product: A blockchain platform with focus on scalability and security

As a first step to becoming a better blockchain platform, Zilliqa introduced a new programming language for creating smart contracts—Scilla. The mainstream programming language for writing smart contracts is Solidity, the primary language on Ethereum. It is popular and widely used, though sometimes considered outdated. Scilla’s core principles are being secure and easy-to-use. Scilla has the capability to formally verify the security and correctness of smart contracts, which has eliminated several common security vulnerabilities at the language level, such as reentrant calls to smart contracts and integer over/underflow. The code in Scilla should be easier both to write in and to audit (find bugs).

Zilliqa uses a hybrid consensus mechanism consisting of Proof-of-Work and practical Byzantine Fault Tolerance. In this mechanism, pBFT serves for consensus and PoW for additional resistance to Sybil attacks. Note: a Sybil attack is an attack in peer-to-peer networks, based on forging identities.

Mining Zilliqa is not directly based on PoW. Within the Bitcoin network, PoW is used in creating each new block. A Zilliqa node does PoW every 60 blocks, at the beginning of a process called DS epoch. When a valid PoW solution is submitted to the network, each node will then have to participate in the pBFT consensus protocol. To put it simply, mining Zilliqa is more energy-efficient than in traditional PoW systems. At the same time, Zilliqa has the high level of security usually associated with PoW.

The method to make Zilliqa scalable is sharding—a method of splitting the network into several parts. Sharding makes the throughput of the network very high. The throughput increases linearly with the network size. The network may assign shards with different tasks and aggregate results. Implementing sharding to distributed ledgers allows the combination of high performance and decentralization. 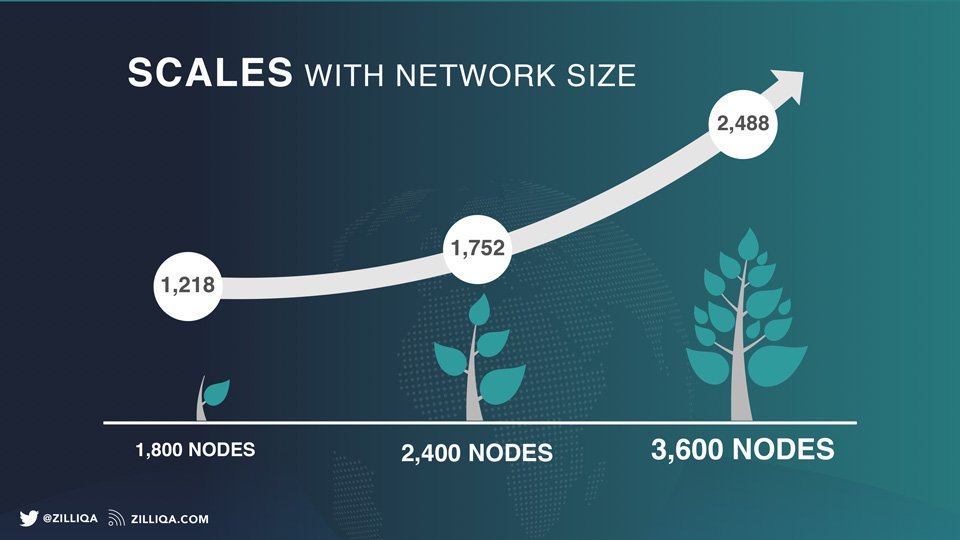 Security is another important aspect. Apart from providing secure technological solutions, the team highlights the importance of decentralization. Preserving decentralization ensures that the blockchain is secure through the consensus of public opt-in nodes.

Zilliqa definitely has potential as a DApp platform. There are several Zilliqa-powered DApps related to payments, supply chains, and gaming. With the new Grant Program, even greater progress might be expected.

Zilliqa is among the most promising and the most undervalued cryptocurrency projects. The main strengths are: groundbreaking tech solutions to real problems, a strong team, and constant work on self-improvement.

Work on the product during 2017-2018 was intense and bore fruit. Now, with the mainnet launched and token swap coming soon, the time has come for growing awareness and the community. The team acknowledges the need for marketing and reshaping the marketing strategy. After all, linear scalability means achieving better results as the network grows. Putting aside the technical side of the product, more awareness might be essential, as there are many strong blockchain platforms preparing to deliver new value to the industry. Many great steps are taken and more are yet to come.

We see Zilliqa as one of the best crypto projects. As always, we remind you that you should conduct your own research to find out whether Zilliqa is worth investing in.

Also, you can buy and trade Zilliqa at CoinEx.